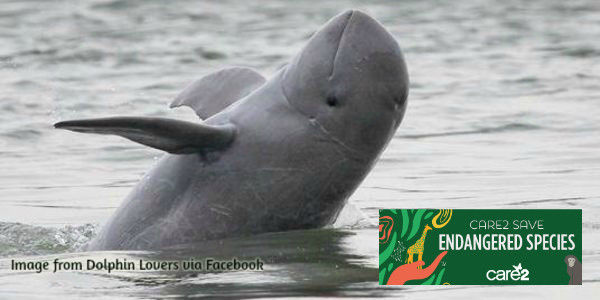 In a 260-mile stretch of the Mahakam River on the island of Borneo, lives the elusive and rare Irrawaddy dolphin. So rare, that in all those miles of river there are believed to exist less than 50. Along with the mighty Mekong River and a few other bodies of water scattered across Southeast Asia, the Mahakam is one of the dolphin's last strongholds.

The exact number of the Mahakam population isn't readily known, but what is known is that in the past few years, several of these amazing creatures have died. When dolphin bodies wash ashore, experts usually identify one thing is to blame, fishing nets.

Fishermen cast their nets along the river, but often catch other animals — some endangered — as bycatch. According to activists, the corpses often display evidence that the animal had gotten entangled in fishing nets. They would have endured a painful, prolonged death.

Although fishermen rely on the river for food and income, the fact that there are fewer than 50 Irrawaddy dolphins means that the government must do something to ensure they have free passage throughout their river territory without the threat of being entangled in a fisherman's net. Already, these nets have been to blame for nearly two-thirds of the dolphin deaths recorded over the last decade by one study.

Please add your name to the petition asking for the Government of Indonesia to protect the Irrawaddy dolphin by creating no-net zones in crucial areas of the dolphin's territory.