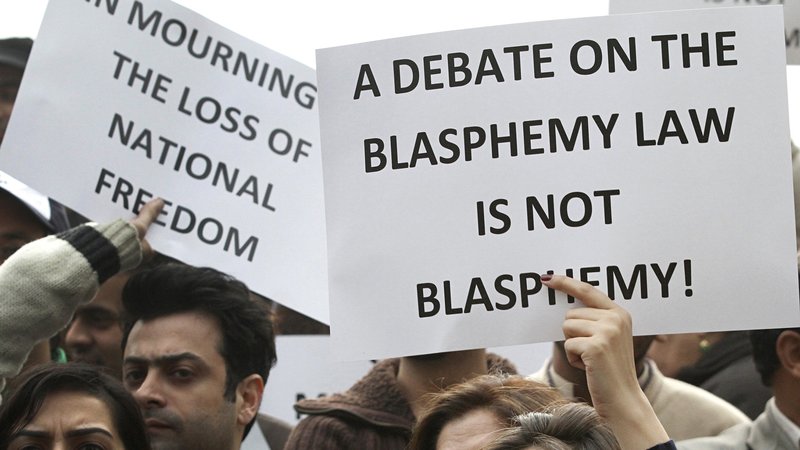 Almost the whole world knows about Asia Bibi: a Christian woman
who was accused of insulting the Prophet Muhammad (peace be upon him), after
an argument with her co-workers while harvesting berries. This accusation let
to her arrest and she was charged with blasphemy. During the trail Bibi
maintained her innocence however, she got the death sentence in 2010. After spending nine long years in solitary confinement, being separated from family, she finally got released in 2018. What Asia Bibi, went through is the harsh reality of Pakistan. Unfortunately, people in Pakistan get accused and charged with blasphemy on a daily basis. Unlike Asia Bibi, not everyone has that luck to be acquitted. In this month alone, 42 people have been charged with blasphemy, with some getting life imprisonment being separated from their family, or even the death sentence.

The blasphemy law is frequently used against members of religious minorities and most of the time it is also used to settle personal disputes. The Pakistani government, on the other hand, rarely charges those responsible for physical attacks on people accused of blasphemy.

Pakistan’s blasphemy laws are incompatible with international human rights standards such as under article 19 of the Universal Declaration of Human rights and Articles 19 and 20 of the International Covenant for Civil and Political Rights. These are the articles that protect the freedom of expression, freedom of religion and other human rights ( right to life).Also important to note is that the blasphemy laws discriminatory in nature, targeting religious minorities.  There is no clear definition of
what constitutes blasphemy. This makes it possible for the laws to be exploited to persecute minorities or exact revenge in personal disputes.

The blasphemy laws contain so many red flags that it is evident that it contradicts with our international Human rights such as,''the right to life, freedom of expression, freedom of religion and the right to a fair trial.

This needs to stop. We cannot let someone become another Aisa bibi. We cannot let innocent families get torn apart based on false blasphemy charges. We cannot allow for adults and children to be tried alike without any dictions.

Just 10 quick seconds of your time to support this petition can make a difference for those innocent families in Pakistan. It can the difference of a family being separated for a
lifetime or staying together. With this petition we want to reach the Dutch ministry of foreign affairs and the European
commission, to look into this pressing issue and make steps forward to address it.

Together we can make an beginning towards the end of such inhuman practices.