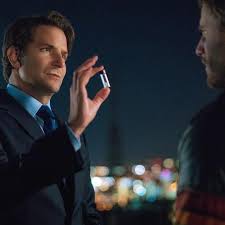 The movie LIMITLESS (Neil Burger) claims Eddie Morra (Bradley Cooper) gets millionaire genius fast of taking a limitless pill named NZT-48. It has serious consequences for the young society, making them to ruin their own brains with drugs named nootropics. Which claim they enhance the functionality of brain and thinking. These drugs not approved for FDA, but only sometimes as Alzheimer's drug or narcolepsy's drug.
I want to bear the company to take responsibility for releasing the movie, without taking warning to people letting know that the drug was highly fictional and not existent.
Neil burger made people look for nootropics especially young people who have desperate and not satisfied by their own mental skills, and they're depressed because of that. People are not looking to practice games to increase mental skills but instead now the new nootropics era was started and killing our youth. The editors of the movie i think correctly, they should have clearly stated that the drug it was fictional and not exist in reality, they should stated that they don't take responsibility.

I was started at Age 20, with nootropics every one of them. Piracetam nicergoline memantine selegiline amantadine modafinil ramiracetam aniracetam donepezil. People should have say it has had consequences, like psychosis, and disattentive like behavior. Since drugs wore off i don't returned for my own baseline, I had paranoia/hallucinations/delusions severe hearing voices they did not wanted to dissappear due to antipsychotic pharmacotherapy. It was like pure hell. Now I'm on disability, Couldn't be able to work only in 4 hours. My mental health is worse than it was ever was. Salary is pretty poor, I couldn't get by to keep myself. So please let's have much people as can possible to help me get financial support from the makers of limitless including Neil Burger.
Thanks Josef H.